I will never forget the first time I visited Olli and Tuula-Marja and their magical smoke sauna deep in the Finnish forests. After a long drive over bumpy roads, a friend of mine and I arrived there late that afternoon and it was already starting to dawn.

Olli had spent the entire day heating up the large homemade stove and preparing the sauna. Quietly he waited in front of his house when we left the car. [...] (Full article for Sauna Seura Magazine below) 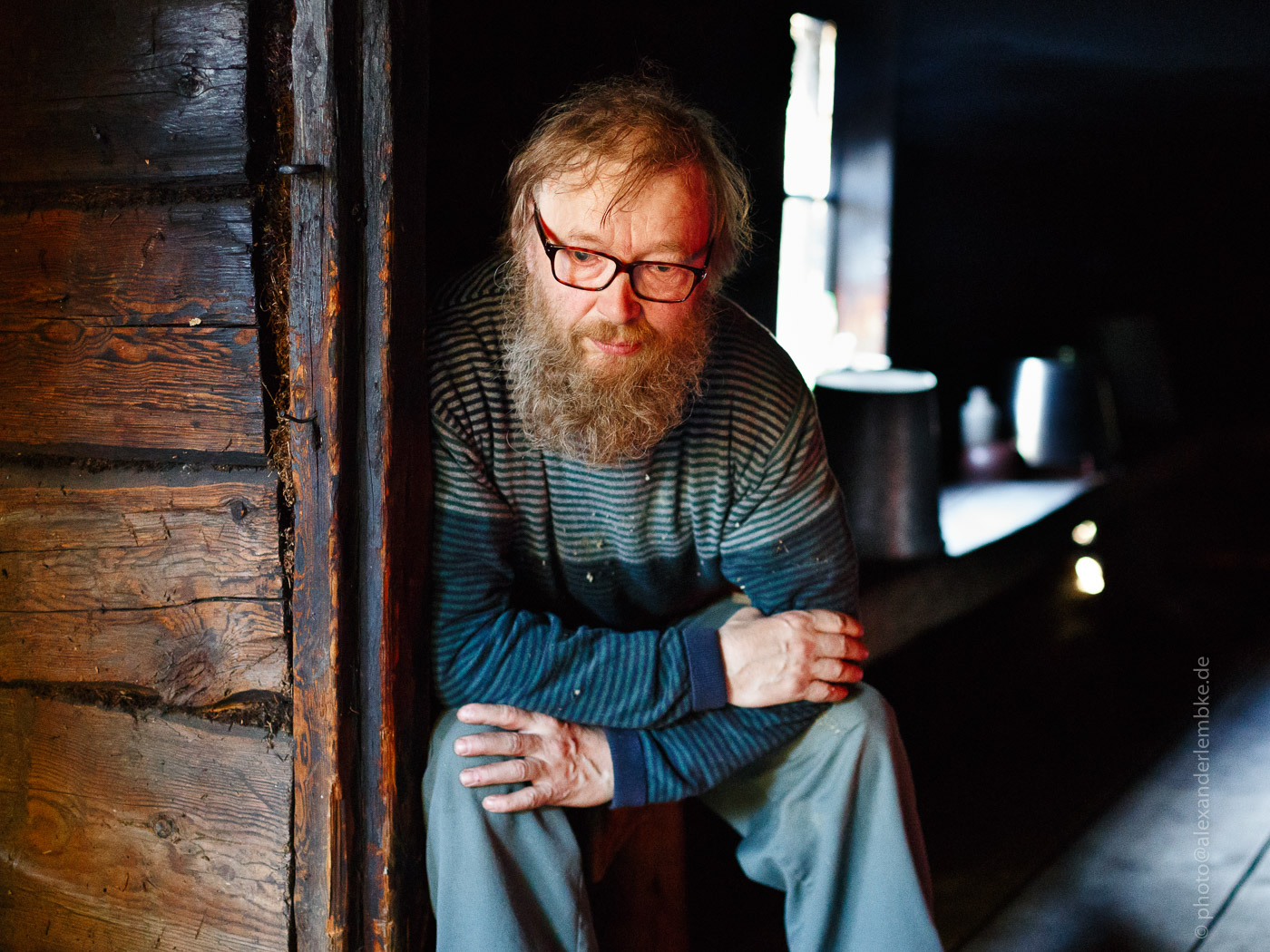 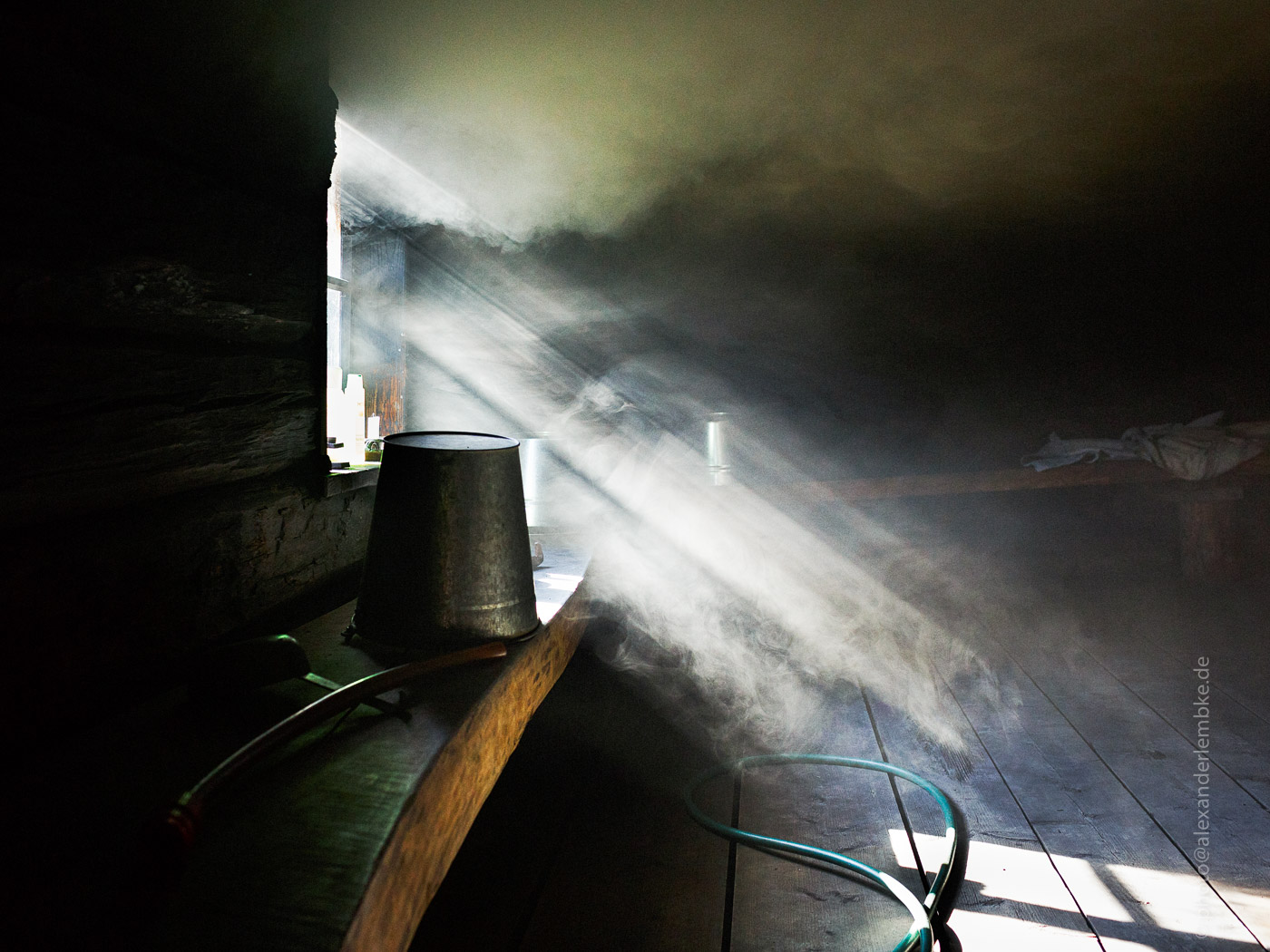 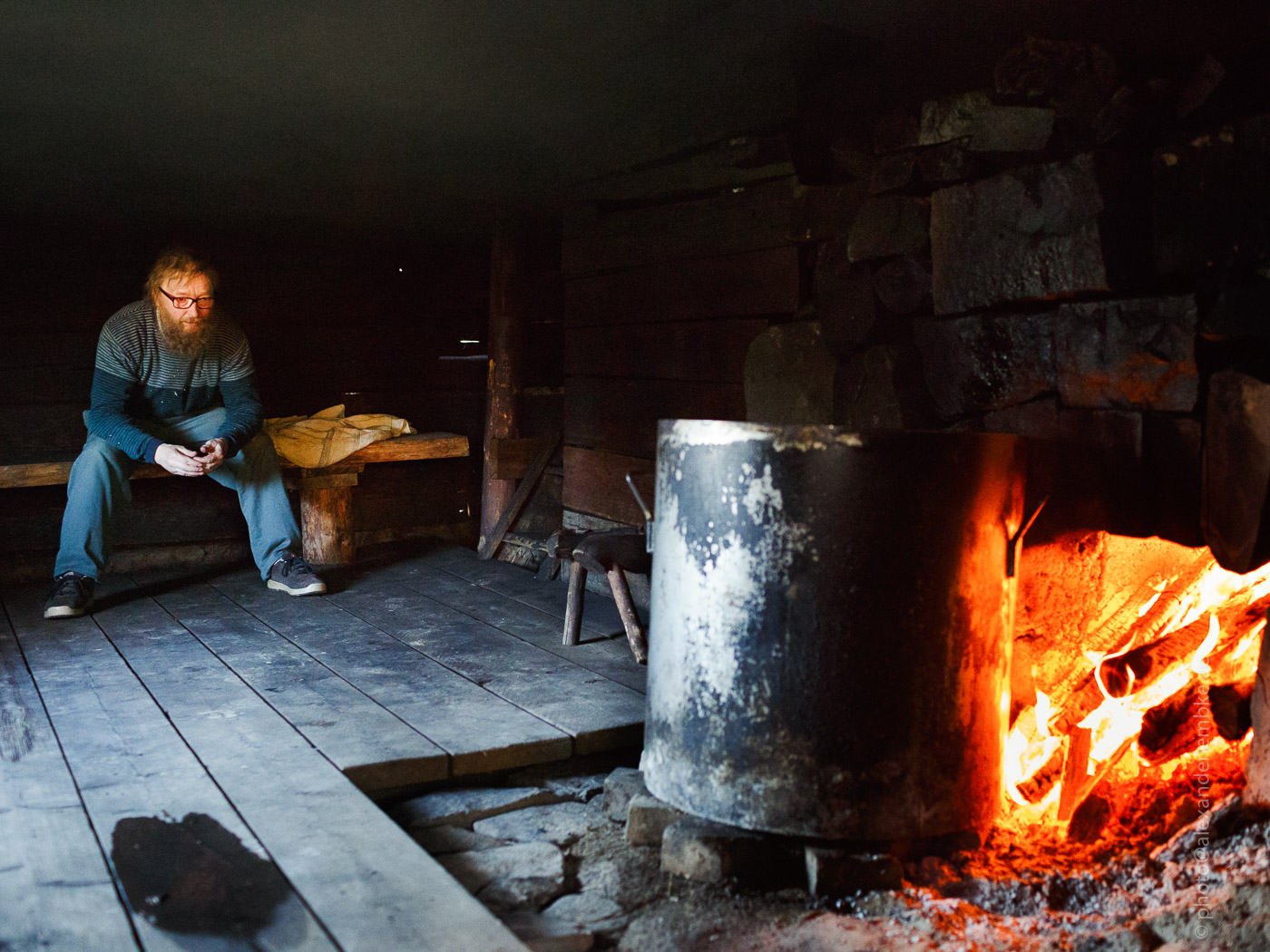 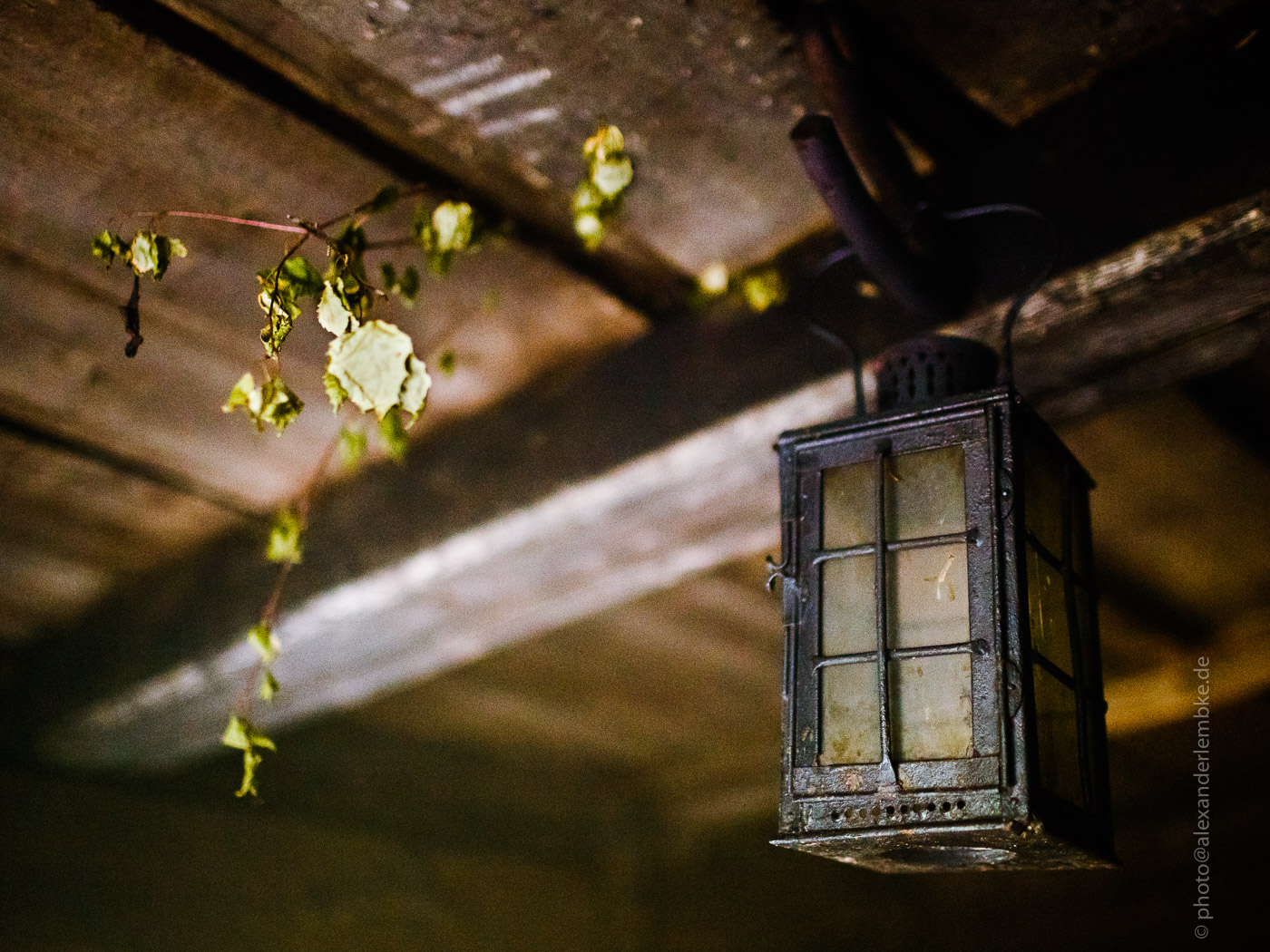 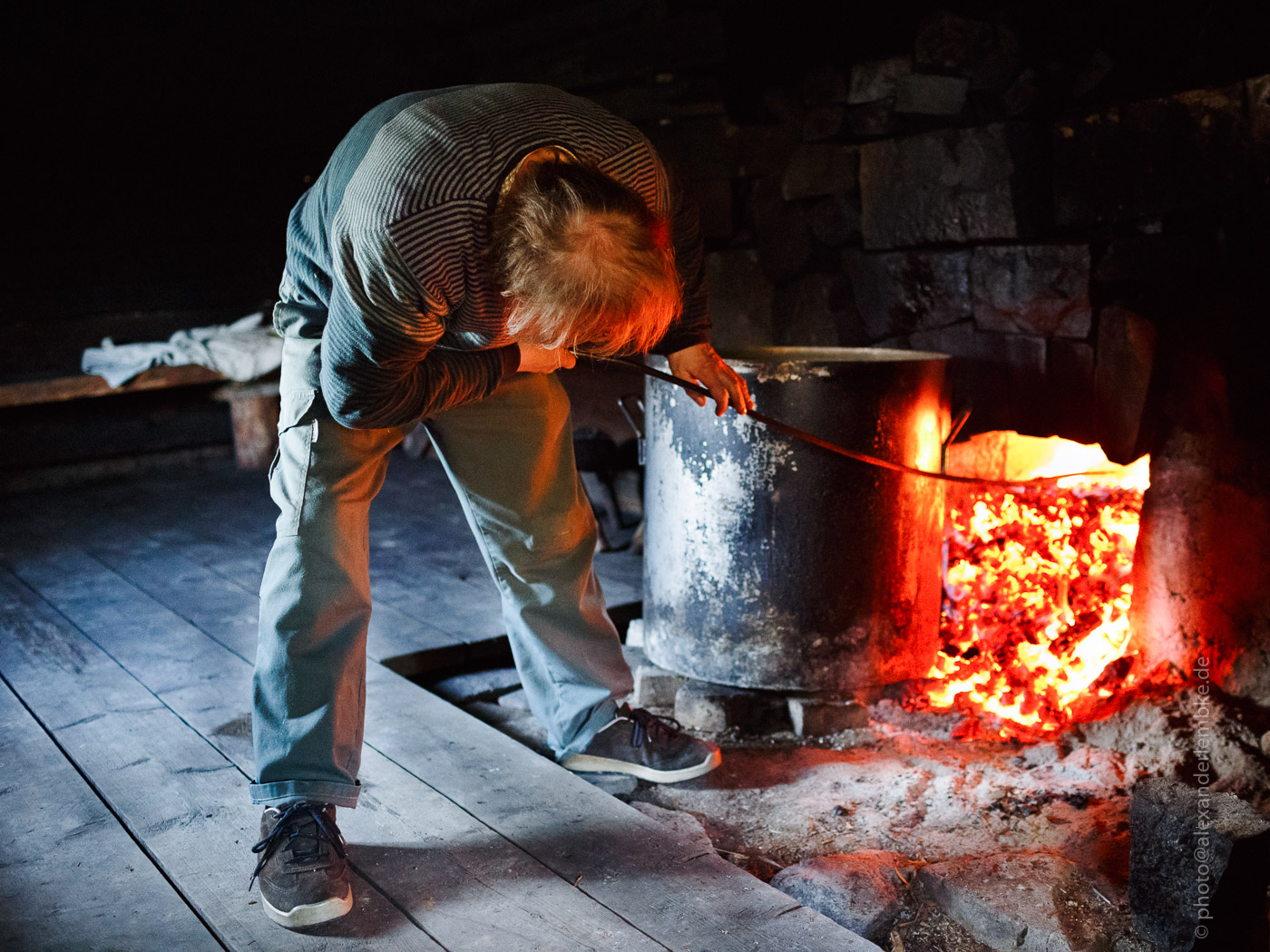 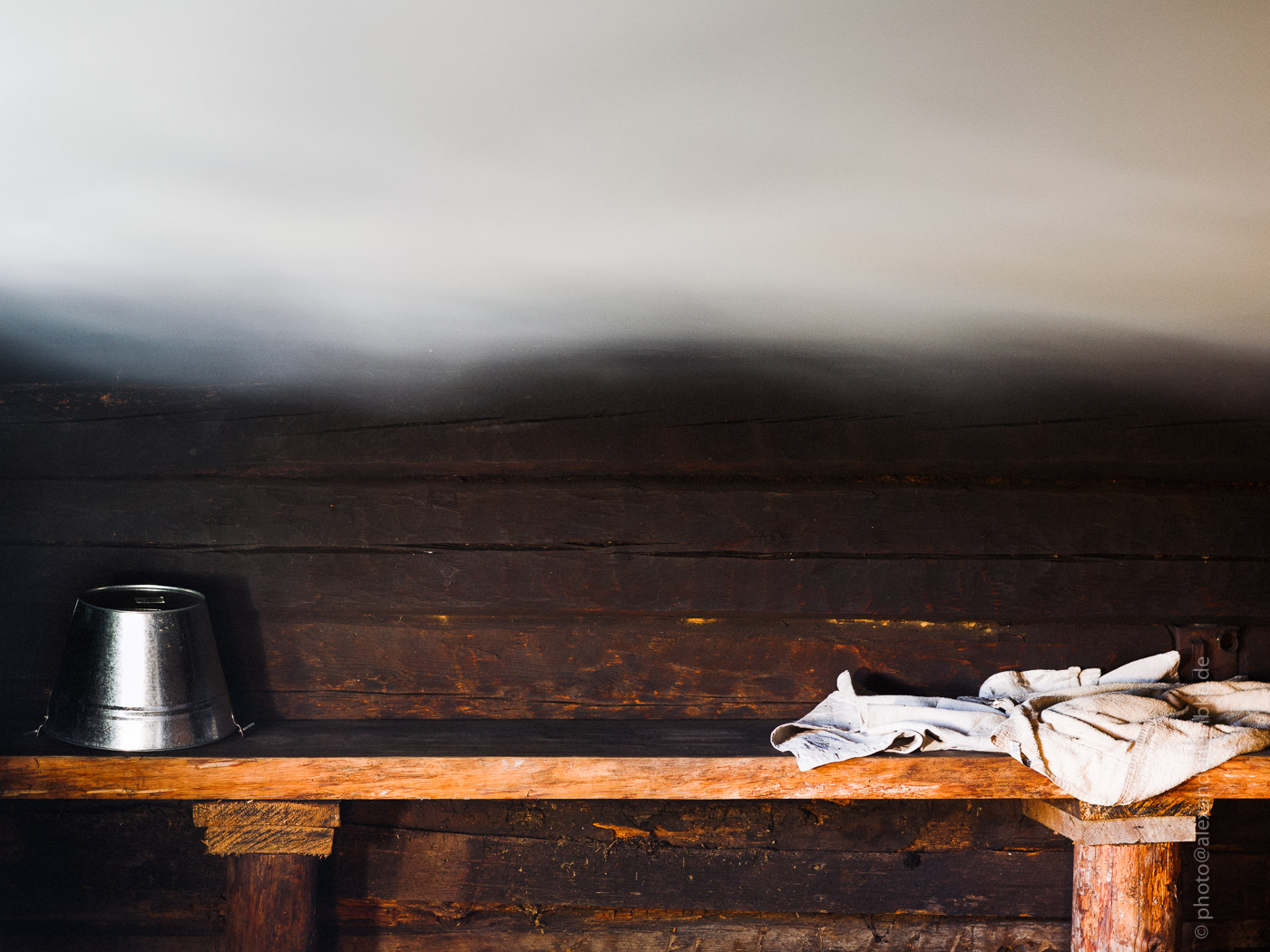 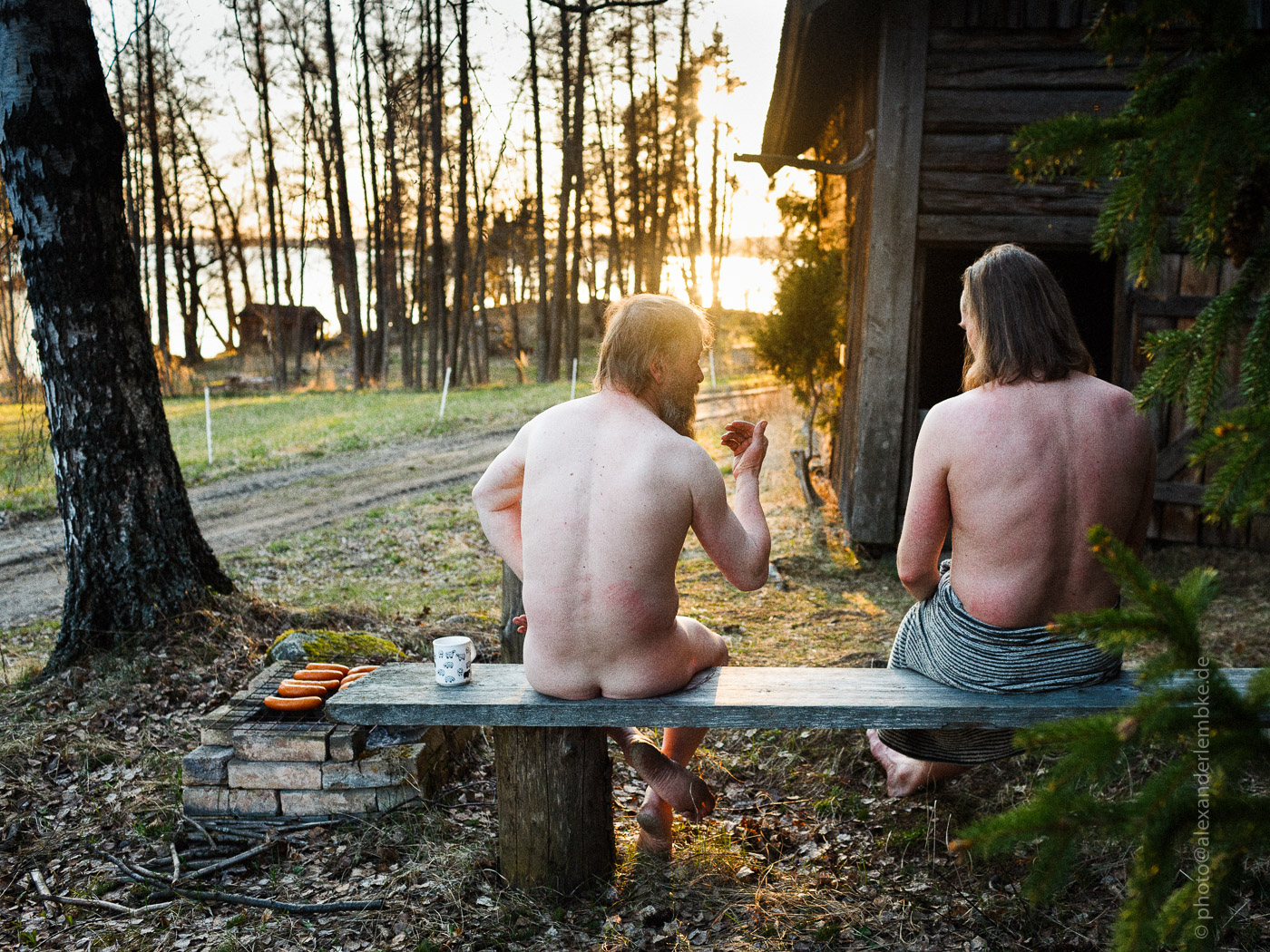 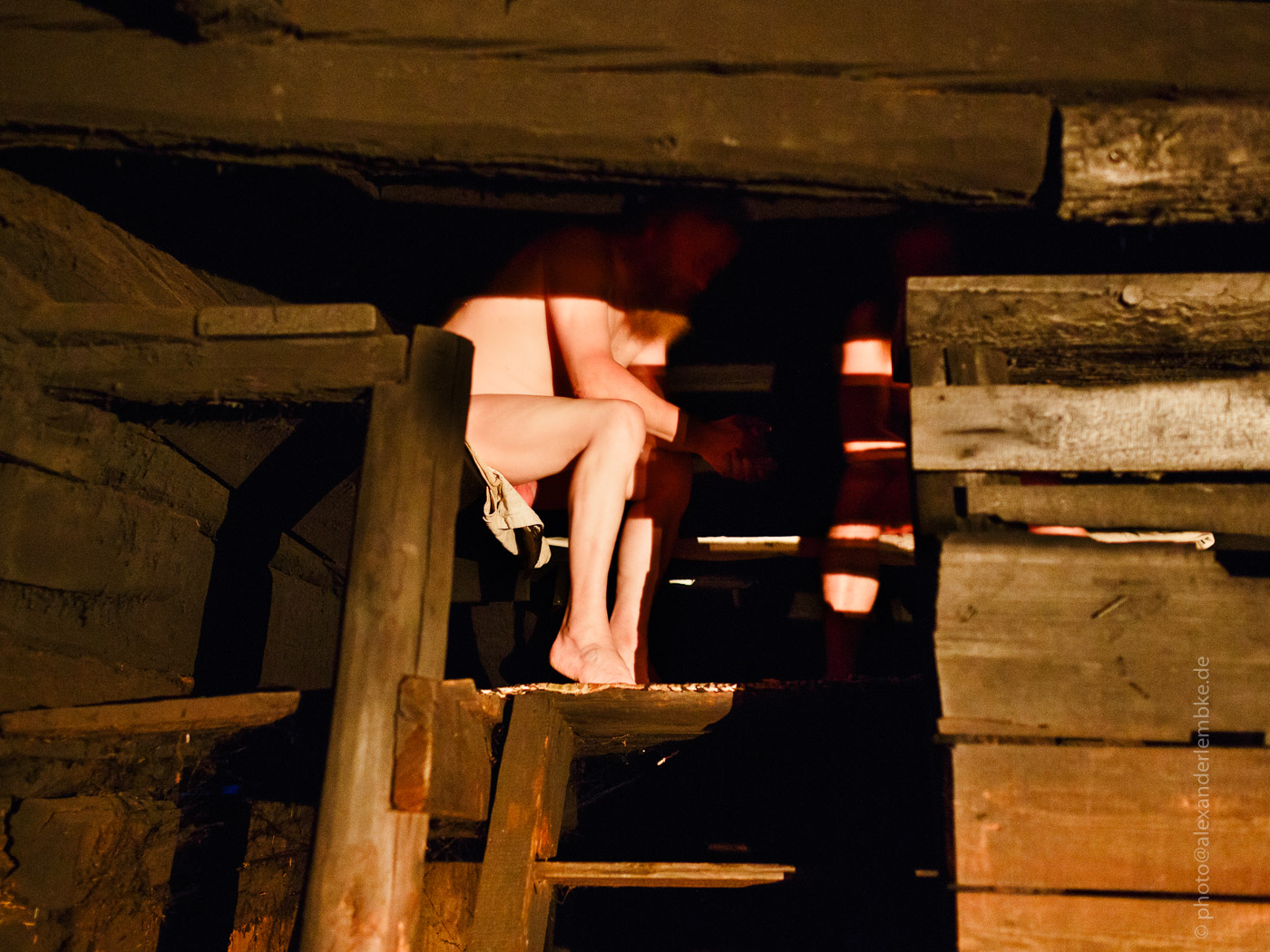 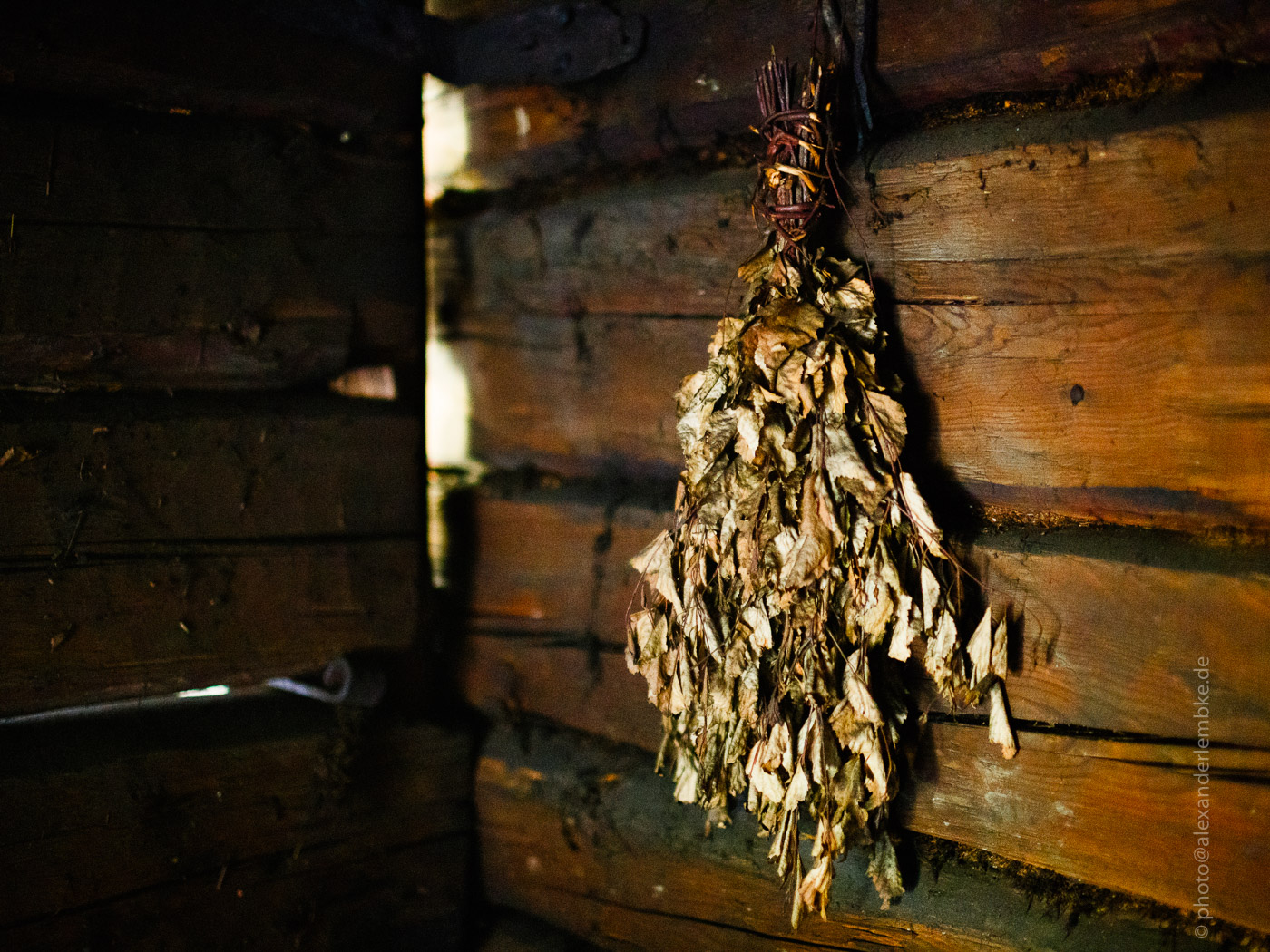 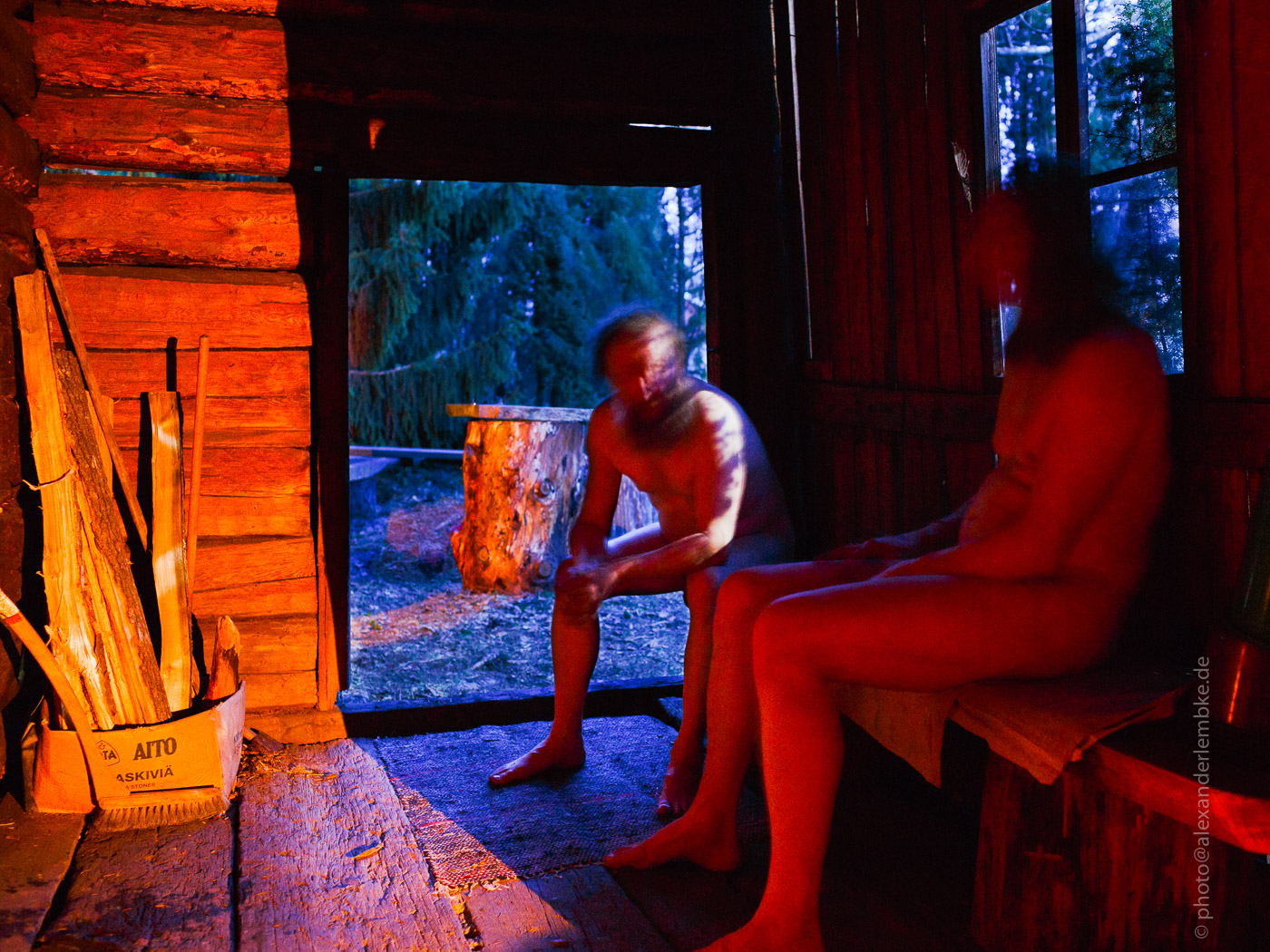 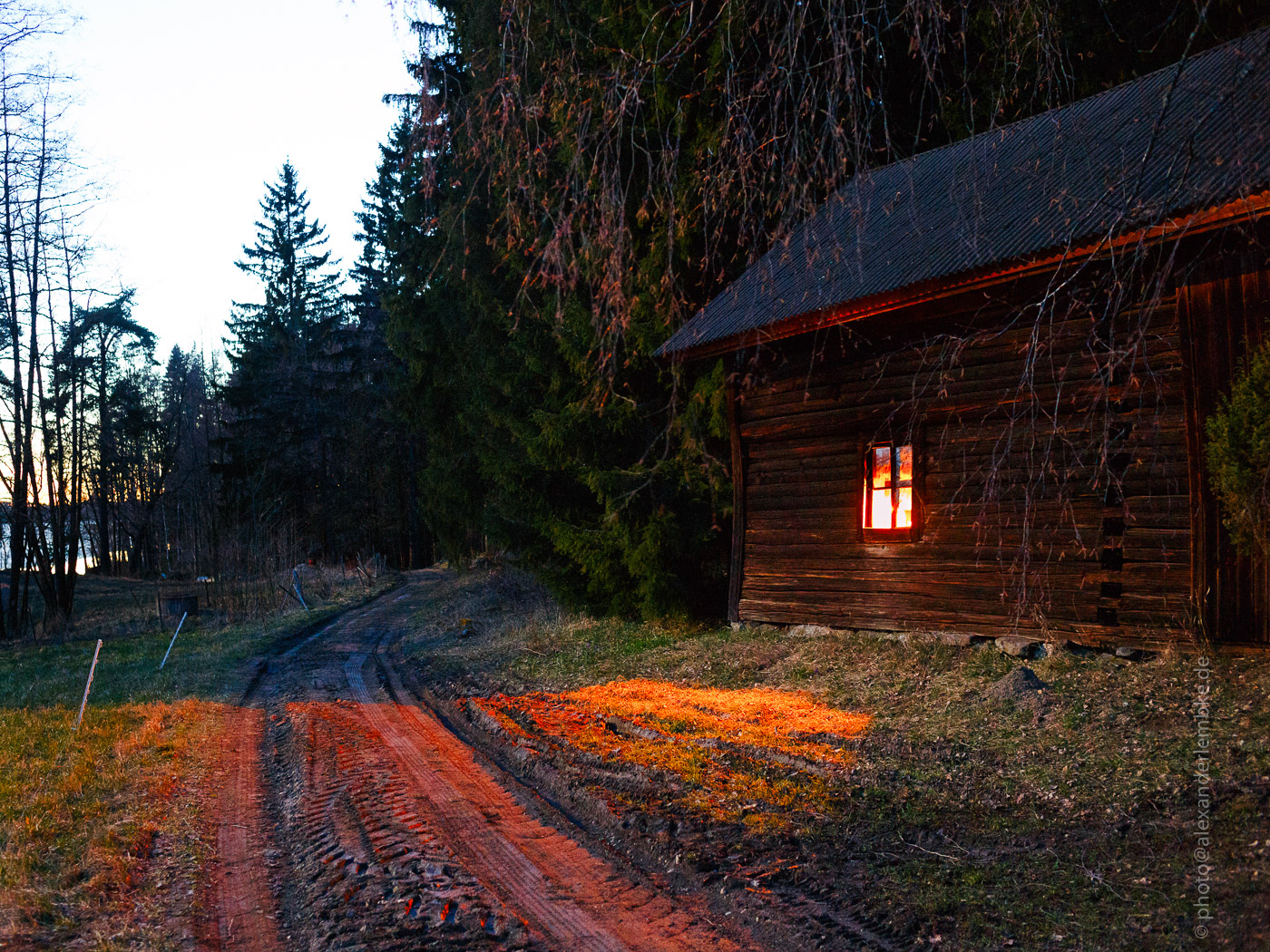 I will never forget the first time I visited Olli and Tuula-Marja and their magical smoke sauna deep in the Finnish forests. After a long drive over bumpy roads, a friend of mine and I arrived there late that afternoon and it was already starting to dawn. Olli had spent the entire day heating up the large homemade stove and preparing the sauna. Quietly he waited in front of his house when we left the car.

After a brief welcome to the house, we walked along a small path at the edge of the forest to his sauna. Spring was just beginning and the air was still quite fresh. Except for a few incandescent lamps illuminating the square in front from the house, there was no light pollution. Above us, the first stars became visible in the clear night sky. Some time later, while we were walking along the path, the old sauna building appeared between the trees. I had never seen such a sauna in my life. The walls were dark brown, almost black, and the sauna was much larger than I had expected. The whole construction looked a bit crooked and the windows were not straight either. Through the sooty glass windows you could see a small light inside.

In front of the sauna were some benches with colorful towels on them, a few cans of beer and right next to the benches was a small grill. My friend and Olli sat down to talk and I took a little walk to explore the area around the sauna. I was struck by the deep silence that hovered over everything. There were no artificial sounds of any kind and even the voices of Olli and my friend seemed muffled. A few more minutes away from the sauna and behind a row of trees was a dark blue lake. The water surface was also absolutely still and the air felt even colder here. A wooden boat lay upside down near the shore and someone was painting it with wood tar.

As I stood on the shore looking out over the lake, I wondered how far away the horizon was. The sun was setting and suddenly the sound of a bird's wing could be heard in the distance, flying quickly over the water. When it faded away, all that was left was the sound of my own slow breathing. I returned to Olli and my friend and finally it was time to go to the sauna.

A timeless darkness awaited us in the sauna. Until that day, my understanding of a Finnish sauna was based on the idea that it was a hot room where you could pour water on the stones and whose purpose was relaxation. But this sauna was so much different than any sauna I had seen before, as was the way to use it. Thick layers of soot surrounded everything inside and the whole place was lit only by a pale orange glow from several candles outside the windows. I detected a sweet and heavy smell of old dry wood, smoke and birch leaves. The sauna was divided into two smaller rooms and one large room.

While I was still looking around, Olli and my friend started to undress. There was no shower, electricity or any other amenities of modern civilisation. All the furnishings were rather basic, however there was a huge stove with a large amount of sauna stones. After being outside in the cold air for some time, the warmth coming from the stove felt very pleasant.

Besides a few buckets, a water hose and a large metal tub with hot water right next to the stove, there were a few sauna ladles in one corner. They were all homemade and of different sizes. As my eyes adjusted to the sparse light in the sauna, I saw even more objects standing around everywhere. The most unusual was a large fishing net hanging on one of the walls. Not all of the objects had anything to do with this sauna, but they were connected to its past. I did not know this past, but these memories were part of the life of previous generations who used this sauna. A sauna in the middle of the forest full of stories.

Silently we went up a wooden staircase that led to an even darker platform and when we reached it the warmth became more intense and all-encompassing. We sat down on the benches and for the first few seconds I wasn't sure I could stand the extremely hot wood (under my butt). Eventually I got used to it and the whole atmosphere unfolded its full effect. Warm waves of intense heat floated around and I deeply inhaled the aromatic smells.

Without really seeing each other, Olli told us word by word and very slowly the history of this place. From time to time he threw water on the stones and slowly the waves of heat became more intense, embracing intimately from all sides. After a while we went into the cold lake and after I was completely immersed in it time stopped. It was almost completely dark by now and the air didn't feel cool at all. Instead, the transition between warm and cold felt like being immersed in a different state.

Wordlessly, we went back to the sauna and rested on the benches in front of the sauna. Back in the sauna we continued to listen to the stories, but after countless rounds fewer and fewer words were spoken. There was contemplative silence in the darkness and I had completely lost all sense of time. At some point, time must have left the sauna without us noticing. Surrounded by a gentle and intense heat, my mind began to wander and I thought about everything and nothing. I was completely absorbed by the atmosphere and looked down from the platform into the hypnotising figures of candle lights in the reflections of the water tub.

Then the sauna itself began to tell its story. At first the stones began to ripple very softly and soon I realised that the benches we were sitting on were talking all the time. The hot steam joined this conversation and finally the sounds of the forest knocked on the outer door. The sauna let them all in through the holes in the old wooden walls, the birds, the wind and the calls of the animals. It was as if the walls had completely disappeared. When I left the top bench after the last round, I became melancholic because I didn't want to leave this place. Later we went back to the main house. I can't remember ever sleeping so deeply and peacefully during the night in my life. On a second visit to Olli's house, I asked him about his relationship with his sauna. He did not reveal all his secrets, but the old rites of the sauna are still in effect and that is what this film is about.

(For several days after my visit to Olli's house, I still had to think about his sauna and my experience. Soon after, I decided to study the sauna and the rituals of the sauna more deeply as part of the national identity of every Finn. I started my research project on Finnish sauna culture in cooperation with the Goethe Institute Helsinki and the Institute of Wilderness and Wild Technologies.)